Photographer Antrim Caskey moved from Brooklyn, New York to the Rock Creek, WV in September 2008 to live and work in the field full-time. Over the past year she has documented the direct action campaign against mountaintop removal as the embedded photojournalist with Climate Ground Zero, which has taken her to new territory: the witness stand. On May 1, 2009, Caskey was held in contempt of court – along with four activists – in Raleigh County District Court for violating Massey Energy’s Temporary Restraining Order (TRO) by her continued reporting on the peaceful protests. Massey vs. Caskey is pending appeal. Caskey’s attorney Roger Forman promises to take the case to the highest court.

Caskey’s documentary photography has focused on community and social justice issues in such diverse locations as the streets of New York City, the war in Afghanistan, the new cities of India and the hollers of Appalachia. Caskey has published her work in newspapers like the New York Times, the Boston Globe and the Indian Express; as well as magazines like the Smithsonian, Orion and Le Point.

In December 2009, Caskey earned her Masters of Art in Photojournalism and Documentary Photography, with Distinction, from the London College of Communication, University of the Arts London. Caskey hopes to expand her journalism project to include the Rock Creek School of Photography, a burgeoning field school to advance and foster long form documentary photography, investigative journalism, and the printed page.

Dragline will be available by mail only. Please contact Climate Ground Zero directly. Dragline will not be released electronically. 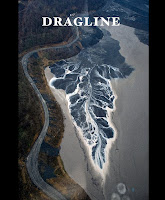 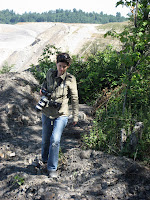 On Jan 26th, today, you are releasing Dragline, your new photojournalistic exposé of mountaintop removal coal mining and the campaign to end it. Why Dragline, and why now?

Publishing Dragline is a concerted effort to expose the coal industry, an industry that does so much harm and yet is so poorly understood. That’s why I chose the photo of the sludge pond for the cover. Most people never see those, and yet if the dam holding back the toxic sludge breaks, it could affect them in a very dramatic way, because literally, billions of gallons of sludge would be heading down river towards some of the populated areas of the county. People should know this.

You have been covering the mountaintop removal story for almost five years. Can you tell us what brought you to the Coal River Valley ?

Maria Gunnoe showed up at my office at the New York Indypendent. She lives below one of these mountaintop removal strip-mines and has been fighting the coal companies for over a decade. She locked on to me, and kept explaining that if you haven’t seen mountaintop removal yourself, you’ll never believe how bad it really was. I went down three days later, and of course she was right. I have made at least twenty independent reporting trips to West Virginia since our first meeting, and a little over a year ago, I decided to move down here full time.

What sort of things have you been doing in West Virginia since you moved here and how does it differ from being a visiting reporter ?

Actually, as it turned out, I was not spending much time in Brooklyn any more, so I sublet my apartment and relocated here to save both time and money, but more importantly, by living here full time I was able to build closer relationships with the people and organizations I was covering. Trust is very important around here and I thought I had close enough relationships with the people on all sides of the issue to cover this story in a a more honest and personal way.

You have said that you became embedded with the resistance. Can you explain that?

I was embedded with US soldiers in Afghanistan who were training Afghan security forces. I had to live with the troops and move with the troops. We ate the same food. That’s what I’m doing here. As an embedded journalist in a conflict zone, it’s OK to pick sides. Photojournalists like Robert Capa were against Fascism. He supported the soldiers that he covered. In a sense, it’s not much different here. If I want to cover this campaign, I have to move with them, and it’s not a conflict for me that I support their goals of ending mountaintop removal.

You have been arrested three times covering this story. Can you tell us about that experience ?

One thing that happens to an embedded journalist is that not only do you share the food and living space of the people you are covering, you are also sharing the risks. So even though I was not a part of the protest, I knew I could be arrested. And while I was arrested three times, both the state police and the miners treated me as a reporter. They did not seize my cameras or film, and on the fourth protest that I covered, they did not even arrest me. I now have an appeal for the first arrests pending in West Virginia Supreme Court and we will see how that goes. However, other reporters have had their film and equipment destroyed by Massey Security, so it’s still very unpredictable.

What do you think Dragline will accomplish ?

Reporters usually cover issues. They rarely cover campaigns, unless of course they are electoral campaigns, because they think they will be accused of taking sides. But sometimes an issue is so compelling, the injustice so egregious, that even a journalist has to take a stand. Mountaintop removal coal mining is one of those issues. I think the campaign against mountaintop removal is the most compelling and successful campaigns on climate change in the U.S.. It’s a story that needed to be told.

What’s next after Dragline ?

Well, I have started the Rock Creek School of Photography, under the auspices of my new group, Appalachia Watch.  I have had my first photojournalism training already, as part of the Climate Ground Zero Winter Action Camp…It was a great experience and I actually have several applicants for photojournalism interns.  I think the photojournalism trainings have a lot of potential – right here in the heart of West Virginia and modern day coal mining. My students will be documenting the last days of coal and hopefully the restoration of Appalachia.

One Reply to “Dragline: The CGZ Interview”