Coal Country, a film made by Phylis Geller and Mari-Lyn Evans, is different than the handful of documentary films produced on the same subject in the last years, including multi-award winning films Mountaintop Removal by Michael O’Connell and Burning the Future by David Novack.

Coal Country looks “at both sides” more than any previous documentary and last night’s audience reflected this point of view. Randall Maggard, a local coal operator, was featured in the film. Maggard had the rare opportunity to say “his side” of the story — what mountaintop removal is all about, how it works, etc…

Coal Country succinctly and orderly examines the process of mountaintop removal coal mining, the tremendous life and health hardships endured by the Appalachian people who find these operations in their communities and the legal battle in various state courts over the issue.  Viewers get to see Maggard, the coal operator, working on the job and reflecting at home.

Probably the most poignant moment in the film is the one few who follow the issue have seen either on the silver screen or in the pages of the Vanity Fairs and National Geographics – Maggard weeps while describing a conversation he’s had with his school-age daughter who receives an assignment to look at the devastation caused by the unprecendented mining process.

Executive Director Mari-Lyn Evans said that she found Maggard at the end of the film screening standing alone, off to the side, weeping again.  Evans approached him to offer comfort and Maggard emphatically told Evans, “We have got to talk.”

According to Evans, Maggard approached 2003 Goldman Environmental Prize winner Judy Bonds, who was featured in the film, and shook her hand, declaring that they must talk too.

Can a documentary film foment social change? It seems that Coal Country is the first to truly engage “both sides” in a discussion of the controversial coal mining process.  Apparently Maggard has already begun to feel the wrath of the coal industry for even appearing in the film — a familiar consequence for those Appalachians who’ve been speaking out for their communities for years. 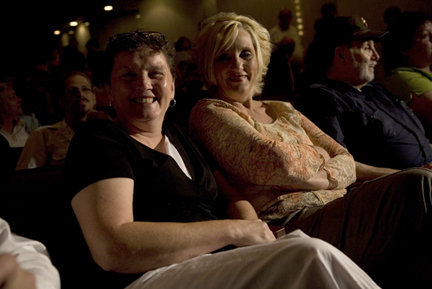 Will this be an opportunity to unite? Did the audience in the Cultural Center form a bond of understanding?  A promise to talk ?  Did the audience see that they themselves have more in common than with the Don Blankenships and Gene Kitts of the world?

Interestingly the reviews of the film today all noted how the crowd in the theatre was “pretty calm.” Well, if you are accustomed to a silent theatre while watching a film, this theatre was rockin’. Talk-back to the screen came mostly from coal proponents who comprised about one third of the film’s audience. And when Evans thanked Ken Hechler in her pre-screening address, this vocal group errupted in jeers, catcalls and insults; in response, those who honor Hechler’s decades of service to the state of West Virginia, rose to their feet to give the 94-year-old a standing ovation. This was the tensest moment of the night.

As the film credits rolled and the audience began to pour out into the night, a small group of coal miners, who were easily identified by their black Argus Coal t-shirts, became hostile and agitated while talking to a few activists, who were probably fighting a losing battle in trying to discuss such an emotionally charged issue in the aftermath of a film screening that basically nails that fact that mountaintop removal must end.

Capitol Police were on the ball and were seen running to the outside entrance, where a heated conversation was brewing. Approximately six coal miners were escorted from the building property by three officers.

Seems police supervision is still needed for these conversations.