ROCK CREEK, WV —  Attorneys for four Climate Ground Zero activists and independent photojournalist Antrim Caskey are to file a Petition for Appeal to the West Virginia Supreme Court over civil disobedience activities in Raleigh County in the Circuit Court this morning.

“We are petitioning the West Virginia Supreme Court to review rulings which we consider erroneous and look forward to presenting the petition to the Supreme Court,” said attorney Roger Forman, partner at Forman and Rist, from his office in Charleston, WV.

Attorneys for the plaintiff, Alex Energy, Inc, a subsidiary of Massey Energy, will have thirty days to file a response, after which time the West Virginia State Supreme Court will then decide  to hear the case or not.

Activists William Wickham, Madeline Gardner, Charles Suggs IV and Jordan Freeman are named on the appeal in conjunction with an April 16, 2009 protest on Massey Energy-owned Goals Coal Company.  The activists hung a banner over a highwall at an active blast site on the Edwight mountaintop removal site just above Clays Branch. The homes of Naoma were clearly in view.

“The coal companies are blasting just above the homes of Coal River Valley residents, like the Webbs in Peachtree.  It’s unbelievable what the coal companies get away with.  Everyone I know down here is determined to stop them,” said photojournalist Antrim Caskey, who moved from New York City to Rock Creek to cover mountaintop removal.

From February 3, 2009, more than one hundred activists have been arrested for trespass or obstruction on Massey Energy mountaintop removal mines in dozens of actions of non violent civil disobedience.

A photojournalist working in West Virginia claims a restraining order issued at the request of a mining company there is infringing on her right to report on a brewing local controversy.

Antrim Caskey, a photographer based in New York, and five environmental activists were hit with the restraining order last month after trespassing on property owned by Massey Energy Co.

Caskey told the Reporters Committee she had been reporting on the controversial mountain removal activity there since 2005 and started covering Climate Ground Zero, a group that includes some of the cited activists, in 2008.

According to the complaint that led to the restraining order, Caskey was photographing protesters James McGuiness and Michael Roselle on Feb. 3 as they formed a human roadblock on Massey property. Security officials informed the three that they were trespassing on private grounds, but they refused to leave, leading state police to issue misdemeanor trespassing citations, the complaint said. Massey says this is the third such trespassing incident for the trio in less than a month.

Reporters generally are subject to the same laws and guidelines that determine where any member of the public can go. Thus, the court’s order prohibits Caskey, the activists, and “all other persons allied, associated…or acting in concert with them” from mining properties affiliated with A.T. Massey Coal Company, Inc. and Massey Energy Co., the country’s fourth-largest coal company.

While the order does not explicitly prevent Caskey from writing about the protests, Caskey says that it nevertheless has interfered with her ability to cover news from the controversial mining sites – raising the question of whether the court or the mining company should have found a less restrictive alternative to an outright ban.

If Caskey trespasses in violation of the restraining order, she could be held in contempt of court.

Caskey, whose work has been published in The New York Times Magazine and the Columbia Journalism Review, said she had never been arrested prior to covering the mining protests.  For a journalist, the order feels “completely improper,” the photographer said.

Caskey said she is not a member of Climate Ground Zero but considers herself to be “embedded” with it. Her relationship to the group is sometimes misunderstood, she said: “I’m just lumped together with the activists because of my reporting and it’s sympathetic, apparently. . . . But I’m just talking to people.  I’m just pointing my camera.”

Several journalism experts, when told about Caskey’s case, stressed the value of allowing reporters to access the places where news is happening whenever possible —  even where landowners are not legally obligated to do so.

It is important for a judge to distinguish between the demonstrators and the photojournalist covering them, since the coal company’s real dispute seems to be with the activists, said Professor Stephen D. Solomon of New York University’s Arthur Carter Journalism Institute.

Caskey’s presence as a “neutral observer” of the group’s actions should not undermine her claim of being a journalist, said Professor Jay Wright of Syracuse University’s Newhouse School.

But regardless of her intentions to report on the mining controversy, Wright points out that Caskey is still subject to trespassing laws.  The mining companies are within their rights to keep her off their property and “to pursue any legal remedy to keep her from trespassing again,” he said.

Even so, Solomon said, the crucial question should be whether the reporter was being disruptive.

“If not, it seems the trespassing violation is really technical,” he said, explaining that people walk on private property every day without being arrested.

Niall A. Paul of Spilman Thomas & Battle, who is representing the plaintiffs, said it was unclear when the citation was issued that Caskey was a photojournalist. But she was still trespassing, he argued, and was standing in the middle of a road, putting herself and others in an unsafe situation.

“It’s not that she’s been prohibited from taking pictures,” Paul said. “As long as she’s not trespassing.”

The current restraining order, effective until Tuesday, is an extension of a temporary order that had been issued Feb. 27. A hearing on a preliminary injunction is scheduled for tomorrow, Paul said, though Caskey’s lawyer is moving to reschedule.

Caskey has consulted several civil rights and media groups, including the Reporters Committee, to find out what her options are. Her main goal, she said, is to try to get the restraining order against her vacated so that she can resume reporting: “I came in here not knowing anything and after four years [of reporting on mountaintop removal issues], I’m on the side of the facts.”

Copyright 2009 The Reporters Committee for Freedom of the Press. 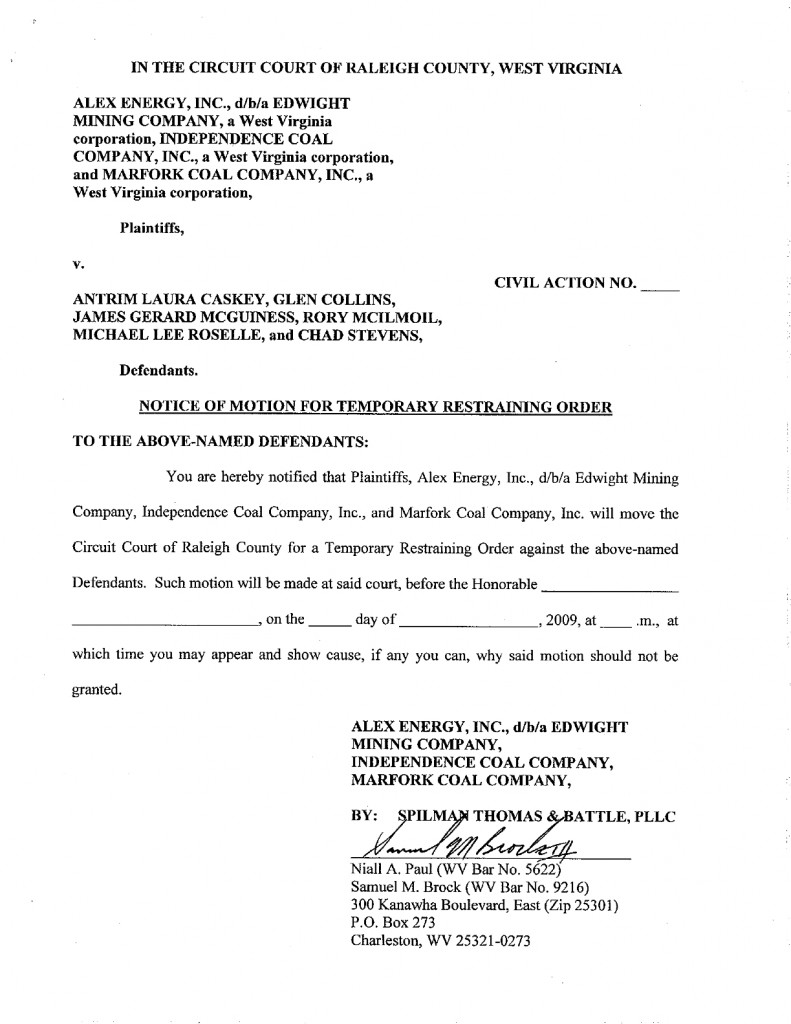